The Mistery of Crater of the Macaws

MATO GROSSO DO SUL – At the region of the town Rio Bonito, in a locality named Alegria Farm (Fazenda Alegria) there is a huge crater. It has 512 meters of diameter and its depth is unknown. It's the Macaw's Hole (Buraco das Araras), a place of difficult access (look the photo). The explorers that managed arrive there confirmed that the crater is indeed an enigma. 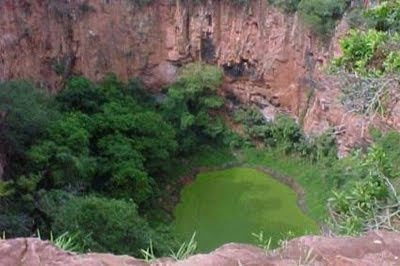 The vertical walls of the abyss have terraces, tunnels and caves that hide amazing scenarios. All things there is very strange, macabre and unexplained. The tunnels seem to be work of human hands or other intelligent agent.
In the 1970s the Brazilian Army sent an expedition to the site. Technicians reached only 90 meters deep. They found a collection of the strangest objects: many human bones and carcasses of cars destroyed. No one knows how the cars were stopping there. It's as if they had fallen from the sky. 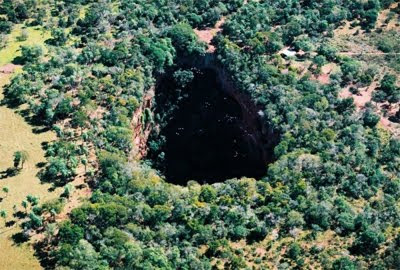 Other explorers, using techniques of rappelling, down more there are 124 meters deep (the equivalent of a 41-story building) found a lake of green waters, dark and dense. There was not observed any form of animal life except a strange reptile, like a kind of crocodile. Also in the vicinity of the lake were found human bones and more one car destroyed.
Some scientists believe that the crater can be result of the fallen of a meteorite at a very ancient geologic epoch. However, there are many legends that recur the fantastic and the supernatural as an explanation for the mysteries of the crater. At the place, would have fallen a UFO.
Others say the that the abyss leads to a shelter of extraterrestrial or maybe that the crater could to be a kind of laystall where cars and people abductees are buried in secret, in this strange cemetery, the crater of Araras. And still, others, think that the crater is one of the entrances to an underground world inhabited by a race of intelligent beings unknowns of the mankind.
by L. Cabus