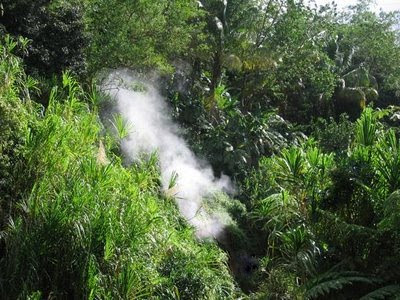 At Miracema, Tocantins state, an unknown smoke is emanating from a cave for the last twenty days. Until now, the phenomenon has no explanation. In friday, 7 of may, a thecnic team from Naturatins (Instituto Natureza do Tocantins, Nature Institute of Tocantins] visited the local for the colect of materials.
According the geologist and chemist, Sanclever Freire Peixoto, one of the hypotheses for explain the occurence could be the increase in temperature, which together with the dry leaves and animal feces, may have caused a combustion.
The cave, a place that is not open to the public, stays 30 kilometers from the center of Miracema city. The Fire Department banned visitations after people started to pass badly with the smoke.A strong smell spreaded around the region. The people thought that the smell was sulphur but scholars say that it is smell of ammonia. Many animals was found dead near the cave. The plants around the area stayed dried and their colors changed. Let's wait the word of the science.
SOURCE: Caverna do Tocantins exala gás misterioso há 20 dias.
IN Olhar Direto ̶ published in 05/08/2010
[http://www.olhardireto.com.br/noticias/exibir.asp?edt=40&id=101168]