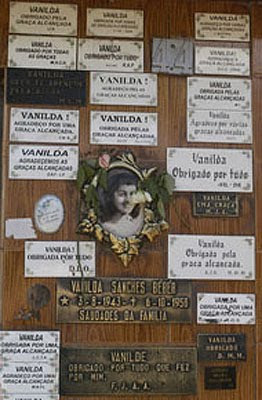 Devotees attribute more than 200 graces to the girl Vanilda
Santo André city, Sãp Paulo ─ The Diocese of Santo André, São Paulo, is colecting informations about Vanilda, dancer and dance professor who died in 1958. The girl have a fame of holiness. Vanilda was dancer and dance teacher. The investigation, first step in the beatification process, is under the responsibility of Bishop Nelson Westrupp. When the process finished it will be sent to the Vatican.
The history: Vanildas's mother, Mrs. Eunice, [89 years] remember that her daugther was a inteligent child. Sheever like to play with images of Saintsinstead of the dolls. Studied dance, especially tap, with her grandmother, who was Spanish. Precocious, at the age 14 she married and became teacher of dance. Also was seamstress, spoke Spanish and knew a little English. She Became famous appearing on television shows of the epoch.
The wedding and her life did not lasted for long much time. The Destiny is imprevisible: at 15, she was dead. vanilda not resisted a preoce pregnancy; at the third month of gestation, suffered a miscarriage and died five days after.
During the time on that she spent in hospital, Vanilda said that had seen the heaven:an that Jesus was dressed in white. During the time on that she spent in hospital, Vanilda said that had seen the heaven and that Jesus was dressed in white. Her tomb is located at the Jardim da Saudade cemetery, in Vila Assunção neighborhood.
When she died, there was a great popular commotion. Soon, miracles begun to be atributed to her. The stories began around the seventh day after the death. Many people said they had dreamed with the girl and, after, have obtained Graces for intervention of Vanilda. The grave of the girl begun to receive a large number of devotees who gather at the site to make prayers and requests.
On her funeral wake, a unknowed woman appeared using a blue clothe. She went to see Vanilda. At the forward coffin, she passed her hand throughout the body of Vanilda. She also passed her hand on a cross that was beside the coffin. Never more the woman was found. She wasn't from Santo Andre. Some people think that woman was Our Lady, the Virgin Mary.
Sources:
GALVANO, Júlia, GOUSSINSKU, Eugenio e QUEIROZ, Elieuda.
Mãe de Jovem Considerada Santa celebra o centenário do Cemitério da Saudade
Fotos: Beto Carvalho
In Prefeitura Municipal de Santo André ─ published in 02/19/2009
[http://www.santoandre.sp.gov.br/bn_conteudo.asp?cod=3296]