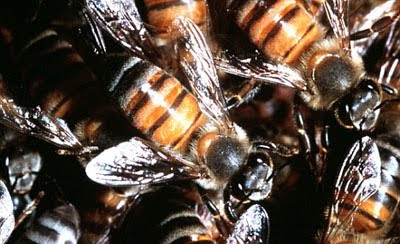 Mato Grosso do Sul ─ Sunday, october 04 [2009], on the road, km 080. Near Rochedo town, at sunset, a swarm of bees caused a car accident. A man died. The insects entered through de car's window. The driver lost the direction control and flipped the vehicle. At the time of the disaster a group of ten motorcyclists that passed there stoped to help victims. As motorcyclists were wearing helmets, gloves and jackets made of leather, they managed to remove the occupants of the car.

When police arrives, the driver, still alive, was covered with bees. Later on, he succumbed to injuries and died. The bees were angry. Without protection against insects, the police could not even get near the car. They returned to Rochedo town to wear appropriate clothing. The situation was resolved only with the arrival of the Fire Department.
Source: Abelhas entram por janela de carro e causam acidente e morte no Mato Grosso do Sul
In O Globo ─ publicado em 05/10/2009
[http://oglobo.globo.com/cidades/mat/2009/10/05/abelhas-entram-por-janela-de-carro-causam-acidente-morte-no-mato-grosso-do-sul 767911867.asp#]

KILLER BEES II
Goiânia [State of Goiás - capital] ─ At Baliza, city on the border between the states of Mato Grosso and Goiás another case of furious bees resulted in the deaths of two people. José Antonio Dias dos Santos, 43 years and the boy Elves Felipe Vicente, 5 years, were with friends attending a picnic on the banks of the Araguaia river when the swarm attacked. Another six people were bitten. According Aragaças's fireman Khenyo Barbosa, who participated in the rescue of victims, Elves e Felipe jumped into the river trying to escape bees.
Unfortunately, dragged through the water, they drowned, the man and boy. The victims's corpses were rescued at about 18h30pm and taken to the Forensic Medicine Institute (IML ─ Instituto Médico Legal) of Aragarças. The other six people attacked were taken to the São Lucas Hospital, at the city of Toxixoréu, Mato Grosso.
Source: GUANDELINE, Leonardo. Homem e menino de 5 anos morrem afogados ao fugir de ataque de abelhas no Rio Araguaia, em Goiás
In O Globo ─ publicado em 05/10/2009
[http://oglobo.globo.com/cidades/mat/2009/10/05/homem-menino-de-5-anos-morrem-afogados-ao-fugir-de-ataque-de-abelhas-no-rio-araguaia-em-goi as-767911588.asp]