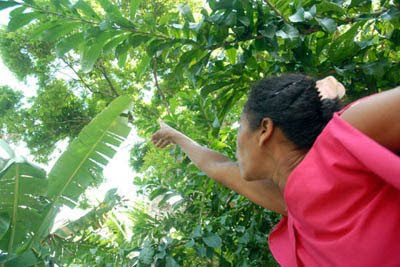 Arês, Rio Grande do Norte ─ At Arez, small city with 12 thousands of inhabitants, located at 58 km from the capital state, Natal city ─ a strange phonomenon happened: in a tropical zone, a Sucupira tree [Pterodon emarginatus] began to exude ice. The ice formations appeared during a week. After, they stopped; but not completely. The tree passed to exude cold water. The Sucupira doesn't produce fruits but among its leaves, sprout purple flowers.
The population of the town is impressed. Many people belives that is a miracle; others say it's spell. However, the news about the phenomenon have attracted waves of pilgrims and the people are destroying another trees and crops livelihood of the little farm. Mrs. Erundina Felix dos Santos, proprietress of the grange where the tree is located tells that her husband wanted to cut the tree. She did not let because loves the Sucupira tree.
Source: Árvore em Arês aguça imaginação dos moradores
In Tribuna do Norte ─ published em 06/10/2009
[http://tribunadonorte.com.br/noticia/arvore-em-ares-aguca-imaginacao-dos-moradores/127330]